A.H.C.C. Maximum Strength 750 mg/capsule, 60 capsules May function as an Immune System Primer*. May increase populations of Natural Killer (NK) cells which destroy abnormal or infected cells* and may double Macrophage and T-cell populations* May also increase Cytokine production* and May fight the HPV virus in cervical infections*

Active Hexose Correlated Compound (A.H.C.C.) a highly purified polysaccharide extract from super-mushroom mycelia. Mushroom polysaccharides have long been known to be beneficial to health but because they are large molecules in the 500,000 Dalton range they are poorly absorbed by the human gut. The Japanese company Amino Up however has succeeded in isolating a small mushroom polysaccharide of only 5000 Dalton in size they named AHCC which they now distribute world-wide. AHCC has very good absorption and has a wide arrange of health benefits. In Japan AHCC is widely used as a preventative supplement that bolsters the Immune system against such things as the common cold or the flu. But AHCC is also used to treat more serious conditions such as chronic infections, cancer, diabetes, heart and liver diseaseidyl-Ethanolamine and Phopshatidyl-Inositol. All three of these phospholipids are present in this product.

AHCC has been well studied in vivo and in vitro. It appears to signal the Immune System to increase production of molecules called cytokines. These are messengers the immune system uses to coordinate a healthy immune response. In addition, AHCC has been shown to significantly increase the number of actual immune cells in the first line of defense as follows:

Adults may take 1-2 capsules, one to two times daily. Use in children is recommended only under medical supervision of a physician.

Children and pregnant or lactating women should consult their healthcare practitioner prior to use. Intended for use by adults. Consult with a healthcare professional to determine appropriate dose and suitability for children.

*These statements have not been evaluated by the Food and Drug Administration.  This product is not intended to diagnose, treat, cure, or prevent any disease. 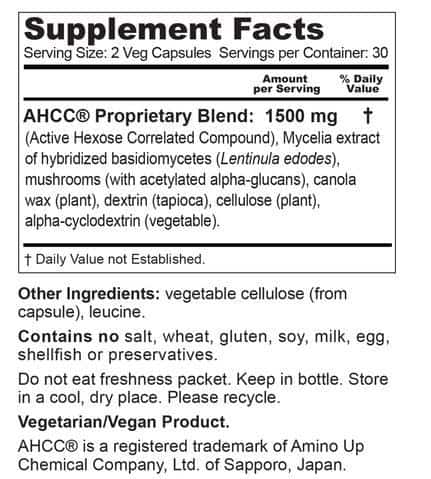 Your Cart
On Sale Products
Go to Top
Enter your name and email and get the newsletter... it's FREE!