Replenish your levels of the building blocks of life… 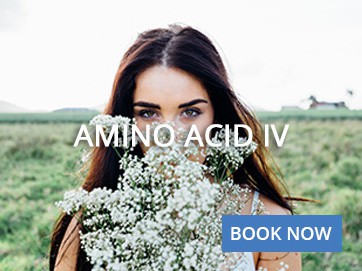 Amino acids are the building blocks of life. Our body uses 23 amino acids, connected in different patterns to build protein molecules. Why is this important? Because your whole body is made of protein. It is used in the synthesis of muscle (actin, myosin), skin and connective tissues (collagen), enzymes (digestion of food) and hormones (insulin, growth hormone, thyroid hormone).

Amino acids are even used to make neurotransmitters like serotonin, dopamine, adrenaline and GABA, which influence our moods, carvings and behaviors.

It goes without saying that we need a constant supply of amino acids to maintain optimal health. The problem is many people don’t get enough amino acids despite eating abundant amounts.

When this happens your body doesn’t have the raw materials required to synthesize compounds that build your body and keep you healthy. This IV is designed to begin to solve that problem. It is the fastest and most effective way to deliver amino acids directly into your circulation, boosting your reserves and sending them to your cells in high concentration.

We recommend advanced testing to see which amino acids may need replacement, although testing is not necessary to begin therapy. Repeated infusions of higher amounts of amino acids and customized amino acid therapy may be needed to relieve chronic deficiency.

AMINOSYN® II with Electrolytes in Dextrose Injection with Calcium

Essential amino acids cannot be made by our bodies. They must come from food. Some of us simply don’t get enough from our diet. But more commonly, the problem is that we cannot properly break down and assimilate the protein we do eat. This is called malabsorption, and it actually affects how well all macronutrients (proteins, carbohydrates and fats) and micronutrients (vitamins, minerals) are processed and taken up by our digestive tract. Malabsorption can occur for a number of reasons.

You may not be able to properly break down food. This is referred to as maldigestion, and it is usually caused by deficiencies in stomach acid, pepsin, or digestive enzymes. Protein digestion begins in the stomach where pepsin is secreted. This triggers the pancreas to release pancreatic enzymes into the small intestine. If this process is inhibited or you don’t produce enough of these chemicals, protein is not properly broken down and you don’t get the amino acids you need.

Another associated problem is intestinal inflammation. This can cause damage to the layer of small intestine cells that play an essential role in digesting protein. These cells contain enzymes that activate the pancreatic enzymes mentioned above. They are also responsible for the uptake of amino acids into the digestive tract, into the lymph vessels that transport nutrients to the liver, and into the circulation. When these intestinal cells  are damaged, these functions cannot be performed correctly.

Common conditions that lead to damage and intestinal inflammation are:

The good news is that a growing body of research shows that amino acids can heal the intestinal damage from inflammation while providing your body the needed components for protein synthesis.

We have begun to learn more about how amino acids improve intestinal health from what may seem an unlikely population: burn victims. You see, people who suffer from burns have a tremendous stress response after their injuries, and this quickly manifests itself as stomach ulcers and gut inflammation.

Interestingly, a study1 done if 2015 of 24 patients with recent burn injuries showed that early treatment with an oral solution containing L-glutamine prevented damage to the intestinal barrier, promoted repair and alleviated the inflammatory response.

Another amino acid, L-arginine, was studied together with L-glutamine, and this combination has been shown to heal inflammation of the gut and repair what is called “leaky gut”—a leading cause of malabsorption. In a 2015 study2 on animals, investigators showed that treatment with L-arginine and L-glutamine prevented colitis (inflammation) and repaired intestinal epithelial cells preventing abnormal “bacterial translocation” – a condition where bacteria from the gut “leak through” into the circulation causing inflammation in the entire body.

Amino Acids as Triggers for Hormones

Another critical function of amino acids is building neurotransmitters— molecules that influence our behavior, mood, cravings and sleep.

One of the most important neurotransmitters is serotonin, which is derived from the amino acid L-tryptophan. Low levels of serotonin can cause insomnia, cravings for sweets, depression, and anxiety. Most of the major prescription antidepressants work by affecting serotonin levels. However, supplementing with L-tryptophan can raise the levels of serotonin naturally and may work much faster.

In one study4 59 healthy women aged 45-65 were given a diet rich in L-tryptophan. The results were impressive. The women experienced improved moods, faster reaction times, “high energy”, sustained attention and higher levels of happiness. These volunteers began to ignore “negative thinking” and had more positive outlooks.

But serotonin isn’t the only neurotransmitter impacted by amino acids. Dopamine and norepinephrine—responsible for our levels of contentment and alertness, respectively—are also built from these essential compounds. In a recent review5 investigators concluded that supplementation with the amino acid L-tyrosine improved levels of dopamine and norepinephrine in the short-term, reduced stress, and lead to improved cognitive performance. In yet another review6 the authors concluded that supplementation with L-tryosine or another amino acid, phenylalanine, raised dopamine levels in the brain.

[dt_testimonials type=”slider” autoslide=”3000″ number=”5″ orderby=”rand” category=”michael-d”]
Go to Top
Enter your name and email and get the newsletter... it's FREE!