Enhance your energy levels and protect your skin and body with the body’s master antioxidant. 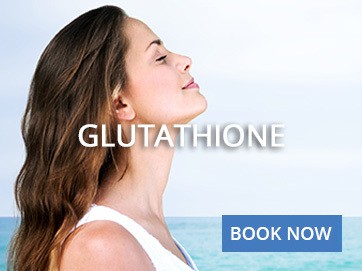 If you could enhance your energy, eliminate ugly skin blemishes, and protect your body from “rusting” with one simple treatment, wouldn’t you?

Of course. It’s a no brainer.

The good news is that you can do precisely this by enhancing your levels of glutathione (GSH)—the body’s “master antioxidant”. This super molecule neutralizes free-radicals and reactive oxygen species (ROS), compounds that lead to a condition called oxidation or oxidative stress—basically your body’s form of rust. You can easily see this “rusting” damage if you have skin blemishes, but it can also be present invisibly in the rest of your body internally.

In ideal conditions the glutathione your body makes will help eliminate noxious molecules like free radicals and ROS without any problem. However, few of us are living in ideal conditions. Nutrient poor diets, excessive stress, too little exercise (or too much), toxic exposures, chronic illness and more drain our glutathione reserves. Replete your levels, optimize your health, protect your skin, and boost your energy with this IV.

Glutathione (GSH): Glutathione is the “master” antioxidant. It neutralizes free radicals such as superoxide and reactive oxygen species (ROS) like hydroxy radicals, peroxynitrites, and hydroperoxides, all of which are byproducts of oxygen metabolism in the mitochondria.

Free radicals and ROS can cause damage to DNA, proteins and cell membranes altering their function, causing mutations and may be implicated in chronic illnesses like cancer or heart disease. Glutathione renders these molecules inert, protecting you from their destructive effects.

Detoxification is another major function of glutathione. GSH attaches to substances like heavy metals and xenobiotics—molecules that need to be excreted—forming “conjugates” that make them easier to be eliminated by the liver via bile and the kidneys via urine.

If you remember high school chemistry, you’ll recall that oxidation is the process that rusts iron and turns apples brown. The same thing happens in your body. As your mitochondria—the little powerhouses in your cells—use oxygen to create energy they produce a form of exhaust: free radicals and ROS that can damage your health.

If left unattended, these compounds can be extremely problematic as they may damage DNA and proteins, alter the function of your cell membranes, lead to cellular mutations, and they are especially taxing for your mitochondria which means when your system is overrun with free radicals and ROS your energy will plummet and health complications will ensue.

Optimal levels of glutathione readily addresses these issues, so it’s easy to see why having enough is crucial.

But the importance of this master antioxidant doesn’t end there. It is also essential for detoxification. GSH attaches to substances like heavy metals and xenobiotics—molecules that need to be excreted—forming “conjugates” that make them easier to be eliminated. The conjugates are then excreted from the cell and eliminated by the liver into bile and the kidneys into urine.

Glutathione also takes part in the citric acid cycle, is important in the generation of cellular energy, and so much more. Suffice it to say, it’s one of your body’s most essential compounds and many of us don’t have enough.

This IV will replete your glutathione levels and may be especially beneficial in high stress states such as chronic illness, and when you suffer from autoimmune or neuro-inflammatory conditions like Parkisnon’s disease and multiple sclerosis.

As usual we recommend laboratory testing to get an accurate picture of your cellular antioxidant levels—glutathione in particular—so we can tailor treatment to your exact metabolic needs.

Glutathione (GSH): Glutathione along with the enzyme superoxide dismutase are the body’s “master” antioxidants. Glutathione is made up of three amino acids: glutamine, cysteine and glycine and has a sulfuric smell. In some individuals who are very sensitive to sulfuric compounds, glutathione administration should be administered very slowly and in smaller amounts with an initial test dose. However, most people can handle glutathione injections quite easily. Here are some of the indispensable functions of this crucial compound:(1-2)

In fact, the actual stress on the cells in our bodies can be measured by the comparing the ratio of reduced (active) to oxidized (inactive) glutathione (4).

How well we can use glutathione as individuals also depends on our cell’s ability to generate active glutathione and kick the used oxidized (inactive) glutathione out of cells and back into circulation.

Simply put, glutathione is one of the most important molecules in our bodies, and levels decrease as we age and battle illness.

[dt_testimonials type=”slider” autoslide=”3000″ number=”3″ orderby=”rand” category=”glutathione”]
Go to Top
Enter your name and email and get the newsletter... it's FREE!