Turn Back Time and Experience More Energy and Improved Mood… 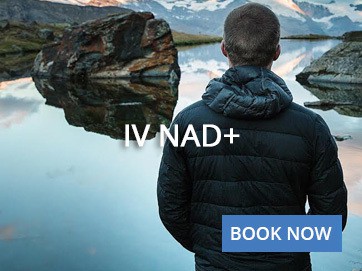 What if there was a compound that could turn back time, restore energy, improve athletic performance, bring back clarity of thought, reverse depression and help cure cravings for alcohol and drugs even in the most addicted individuals?

There is such a substance. It is called NAD+, and it occurs naturally in every cell in your body.

Compelling research has shown that supplementing with NAD+ may help you withdraw from addictive substances safely, overcome anxiety and depression, handle acute and chronic stress more effectively, and cope better with PTSD.

In fact, clinics across the US are starting to use IV infusions of NAD+ to help people withdraw from drug and alcohol addiction with minimal symptoms in as little as 7-14 days of treatment. These individuals report feeling calm and content and say they lost their “cravings” after a full course of treatment.

And NAD+ may actually prolong life, protect DNA, slow down aging and help restore function in neurodegenerative illness due to its effects on the genes that govern aging.

Unfortunately, drugs, alcohol, stress, medications, chronic illness and age all contribute to a decrease in our NAD+ stores. As NAD+ goes down, so does our energy. Cells age and deteriorate. Your health falls apart at the very root.

This IV aims to undo that process by replenishing NAD+. Using IV infusion therapy we administer this anti-aging compound directly into your blood circulation so your cells have access to as much as they need.

Between 3-14 consecutive days of NAD+ therapy combined with amino acid infusions, minerals, and B-Vitamins are typically recommended for full effect. Treatment is tailored to your individual needs after a detailed consultation.

NAD stands for “Nicotinamide Adenine Dinucleotide”. It is closely related to the B vitamin Niacin and can also be synthesized from the amino acid l-tryptophan. It plays crucial roles in energy production (as ATP) inside mitochondria as part of the “electron transport chain”. NAD is also necessary for the production of a group of proteins called “Sirtuins” which play a key role in aging, cell death, stress resistance, inflammation, energy efficiency, and mitochondrial biogenesis.
Close

Energy production in your mitochondria—the little energy factories that pump out ATP—ABSOLUTELY depends on NADH (the inactive form) being recycled back to active NAD+. If this recycling stops and NADH accumulates the cell runs out of energy and it may die. This was clearly shown in a recent study on brain and kidney cells.1

It goes without saying, then, that depleted levels of NAD+ and accumulation of NADH, or a low ratio of NAD+/NADH, can create problems for your mitochondria and your cells. Indeed, it results in low levels of cellular energy and may be one of the primary contributing factors to “mitochondrial dysfunction”. a condition we now know is implicated in a wide variety of chronic illnesses including autoimmune disorders, diabetes, and others.

NAD+ as an Anti-Aging Molecule

Medical researchers have long known that a group of enzymes called sirutins play a crucial role in how the body ages—especially SIRT1 and SIRT3. We don’t yet understand precisely how they work, but what we do know is exciting. SIRT enzymes appear to switch off genes that promote aging such as those that cause inflammation, fat synthesis and storage, and blood sugar management issues.

Up until now the only way we knew to positively impact these SIRT enzymes was to go on a very low-calorie diet. As uncomfortable as it may be, caloric restriction is one of the few ways that has repeatedly been shown to lead to a longer life.

However, the tide appears to be turning. You see, recent research indicates that NAD+ plays a key role in the creation and activation of the sirutins.

Doctors out of the Department of Developmental Biology at the Washington University School of Medicine were the first to show this link in 2014.2 The authors note:

“NAD(+) levels decline during the aging process and may be an Achilles’ heel, causing defects in nuclear and mitochondrial functions and resulting in many age-associated pathologies. Restoring NAD(+) by supplementing NAD(+) intermediates can dramatically ameliorate these age-associated functional defects, counteracting many diseases of aging, including neurodegenerative diseases.”

These findings were corroborated in 2016 when the scientific journal Rejuvenation published an article where the authors discussed how low NAD+ levels are DIRECTLY associated with cellular aging, and they emphasized that this process can be prevented by increasing the levels of NAD+ within cells.

So is NAD+ a fountain of youth? It could be. More research needs to be done. But one thing seems clear: It certainly has an impact on your body at the cellular level, and it may just turn back the hands of time.

NAD+’s Role in Exercise and Endurance

It is well known that ATP levels get depleted in muscles while exercising. This simply stands to reason. However, until recently we didn’t know how NAD+ was implicated in this process.

A study done in 2010 using both trained and untrained healthy volunteers helped tease out the relationship. The researchers showed that intense exercise decreases NAD+. When the study participants took an antioxidant supplement containing pycgnogenol (which stimulates NAD+ production and protects it from turning into the inactive, oxidized form of the molecule), NAD+ levels increased and exercise performance and “time to fatigue” also improved.3

Using a direct IV infusion of NAD+ is certainly a more efficient way of raising NAD+ levels than taking an indirect, oral supplement that acts as a stimulator for NAD+. So we know that this IV can improve athletic performance, and it likely has a more pronounced effect than the study cited above.

At the end of the day, health and energy production are intimately related. If your mitochondria aren’t functioning or they are producing too little energy, you are going to experience symptoms. When the problem becomes too severe it turns into illness.

How all of this shows up in your body depends on which cells are being affected. If nerve cells are affected, the lack of energy may manifest itself as depression, anxiety, fatigue and lack of focus. In severe cases where the nerve cells are dramatically impacted or even die, neurodegenerative illness like Parkinson’s disease and Multiple Sclerosis may manifest themselves. In the worst cases—like mass cellular death—this may lead not only transient symptoms such as tremors, spasms, tingling, numbness and blurred vision, but to permanent, irreversible disability.

If your heart cells are affected, it can lead to cardiovascular disease. If your lung cells are affected pulmonary disorders may present themselves. Basically, when the cells in your organs and tissues don’t have enough energy, illness results.

IV NAD+ combined with IV amino acids can be beneficial in restoring energy production—especially in the nerve tissue—and may even prevent permanent damage.

One 2014 study showed that rat nerve cells pre-treated with high concentrations of NAD+ before being deprived of oxygen survived the challenge and recovered much faster than cells not bathed in the extra protective NAD+.4

A more recent review article published in 2015 builds on this. After scientists examined all of the available scientific evidence they recommended NAD+ supplementation and restoration as a new therapeutic opportunity for a wide variety of neurodegenerative diseases.5

Some of the conditions which may benefit from NAD+ infusion therapy include:

Perhaps the most exciting and controversial use medicine has found for NAD+ so far is in the treatment of drug and alcohol dependency. Despite the controversy, the basic science is sound, and the early results are extraordinary. Patients are reporting total recovery from addiction within 7-14 days with no subsequent craving for their substance of choice and few withdrawal symptoms.

To understand NAD+’s relationship to drug and alcohol abuse, let’s look at its role in the metabolism of alcohol

After you drink, your body tries to process and eliminate every molecule of alcohol. This is done in the liver where ethyl alcohol is converted to acetaldehyde. NAD+ is critical to this process. Alcohol donates one hydrogen molecule IRREVERSIBLY to NAD+ converting it to NADH. That NAD+ molecule is now gone and the NADH in your system begins to build. As this happens repeatedly, the NAD+/NADH balance swings out of favor, and serious problems can occur.

In a 2012 review article, the authors conclude that it is this NAD+ depletion and NADH accumulation that disables the mitochondria in your liver cells from being able to make energy ATP.6 This leads to liver cell death. Your body is then even less capable of processing the alcohol out of your system, which may set the stage for chemical dependency.

Building on this principle, several addiction clinics in the United States have been using IV NAD+ combined with IV amino acid therapy with great success. Dr. Ken Starr of the Wellness Group in San Louis Obispo and Dr. Metsayer of the Springfield Wellness Clinic in Louisana have been using a combination of daily IV infusions of NAD+ and amino acids for treatments lasting 10-14 consecutive days to drastically alleviate the symptoms of withdrawal from opiates, benzodiazepines and alcohol.

Their therapy, termed “Brain Restoration” (BR+) is many times combined with traditional FDA approved medications such as suboxone and naltrexone to achieve a much smoother transition to sobriety with drastically fewer unpleasant symptoms. Remarkably, many of their patients report the subjective loss of “craving” for the drug previously abused after the NAD+ and amino acid combination therapy.

[dt_testimonials type=”slider” autoslide=”3000″ number=”5″ orderby=”rand” category=”michael-d”]
Go to Top
Enter your name and email and get the newsletter... it's FREE!